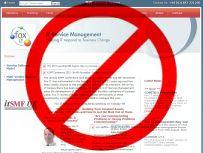 UPDATE 18th APRIL 2013
On the 20th March it was reported that Fox IT, a UK based ITIL Consultancy had collapsed and had entered administration.
It has now come to light that a number of offers were made for the assets of the company. It is being reported that an unnamed director has become the successful bidder.
It is not public knowledge which parts of Fox IT have been purchased, but it has been suggested that the future of some of the employees have been saved.
In its most recent set of accounts, Fox IT made a pre-tax loss of £200,000 on total sales of £6.5m.
ORIGINAL NEWS ITEM FROM 20th March 2013
Fox IT (formerly Ultracomp) in the UK called in administrators on the 20th March 2013.
Fox IT had a significant presence in the marketplace, but it looks like the recession has taken its toll on the ITIL training and consultancy company.
We are lead to believe that all staff have been made redundant at this time.

The Fox IT assets, IPR, ongoing contracts and IT equipment were sold to one of the former Fox IT directors under a "pre-pack administration" arrangement for a derisory sum. Employees, some who were on customer sites at the time, were notified by email on the morning of March 20 that the company had ceased trading the evening before and that they were now redundant from that time (i.e. retrospectively)

It is wrong to say that "the future of some employees was saved". This stems from some self-congratulatory and misleading information apparently released by the Administration company, CMB Partners, who, it turns out, had been called in by the Fox IT directors some weeks before the final and sudden demise of the company.

In fact, only one job was "saved"; that of the continuing director, Ashley Bassett. Some ex-employees who were working on continuing contracts were retained by the new company, Fox IT SM, but as self-employed contractors, not permanent employees.
Other articles in the same section;
Tags; Fox IT,Ultracomp,Recession,ITIL Consultancy company
This article has been viewed 19899 times.
NB: This page is © Copyright ITILnews.com and / or the relevant publishing author. You may copy this article only in it's entirety, including any author bio and / or credits, and you must link back to www.itilnews.com.