NB: This article has been archived, indicating it is either out of date or no longer relevant

This article has been updated and replaced.  Please click here to view updated ITIL v3 Qualification Diagrams March 2011.
Here is the original article;
At last a decision has been made regarding the names of the various ITIL certification levels above or beyond the ITIL Foundation.
Following the ITIL Foundation we have the ITIL Intermediates, then the ITIL Expert followed by the ITIL Master.  The following revised diagram has been issued by APMG in June 2008, which by the way carries no indication of version control (we are not here to chastise, but you could do better chaps!!!), nor does it provide any indication of the 'ITIL Intermediate' level naming convention. 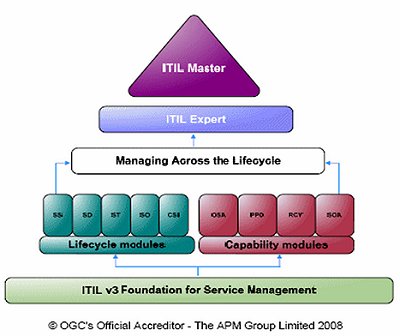 Accompanying the diagram above APMG has issued an updated diagram to explain the ITIL v3 Credit System, although from the following statement it is still incomplete and a further version(s) will be issued:
'Recognizing the value of earlier modules, the new credit system has also been widened to include earlier Version 1 and 2 ITIL qualifications, which at present includes the v2 Foundation, v2 Practitioner Modules and the v1 or v2 Service Manager. Other closely-related qualifications will also be considered for inclusion in the credit scheme. Details of these will be announced as they are confirmed.'
The above statement was published on www.itil-officialsite.com.
Perhaps a concern is the fact that although these diagrams are produced little explanation accompanies them. The fundamental concern that ITILnews has is that on the following diagram a green line with a statement saying '12 credits required' runs from the 'ITIL V2 Foundation Certificate 1.5' box to the 'ITIL V2 Practitioner Certificates' box. No explanation is provided as to what the '12 credits required' means. This is simply not good enough and further explanation is required from the folk at APMG and OGC. Here is the diagram issued in June 2008. 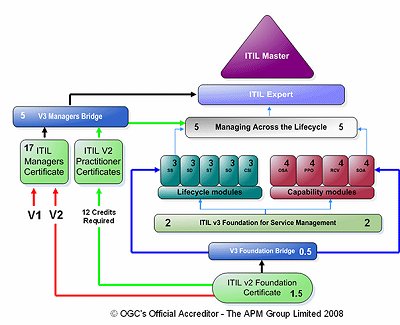 This artilce has been updated.  Please click here to view updated ITIL v3 Qualification Diagrams August 2010.
NB: This article has been archived, indicating it is either out of date or no longer relevant
Be the first to leave a comment about the above article...
Other articles in the same section;
Tags; ITIL V3, Certification Scheme
This article has been viewed 45694 times.
NB: This page is © Copyright ITILnews.com and / or the relevant publishing author. You may copy this article only in it's entirety, including any author bio and / or credits, and you must link back to www.itilnews.com.