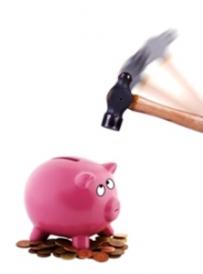 Public sector IT departments are feeling the squeeze when it comes to hiring skilled staff, with 90.5 percent saying they are facing headcount restrictions.
That's according to a survey conducted by recruitment firm IT Force, which shows that IT departments in the financial sector are also being affected -- albeit to a lesser extent -- by the current economic climate, with 76.5 percent of IT managers saying they are facing hiring restrictions.
"Public sector is more stringent in relation to enforcing department quotas on staff numbers," explained Joe O'Reilly, sales director for IT Force's Managed Resources Division, in a statement. "However, the recent climate in the financial services [sector] has seen more control on recruitment and staff numbers also."
The restrictions on hiring IT staff is having an impact on IT departments in the public sector, with over three-quarters (76 percent) of IT managers saying they don't feel they have the skill sets needed in-house to deliver IT projects. The story is similar, though slightly less dire, within the financial services sector, with 65 percent of IT managers saying they didn't have the required skills in-house.
The knock-on effect of this trend sees public sector IT managers having to go to a third party for help in order to complete IT projects: 28.6 percent said they would need to seek external help with ITIL (Information Technology Infrastructure Library) consultancy services and 23.8 percent for IT compliance consultancy. By and large, IT managers in the financial services sector appear to be going it alone, with just 5.9 percent opting to go outside for ITIL consultancy services and 5.9 percent for compliance consultancy.
Things could be looking up for IT managers in the financial services sector, however, with 50 percent saying their budgets are likely to increase in the coming year. Conversely, a mere 19 percent of public sector IT heads said their budgets are set to go up.
For the survey, IT Force interviewed over 150 IT managers in both the public and financial sectors.
The above article was first published by Electric New Net, www.enn.ie
Be the first to leave a comment about the above article...
Other articles in the same section;
Tags; Credit crunch,public sector,IT hiring,IT departments,IT Force
This article has been viewed 10316 times.
NB: This page is © Copyright ITILnews.com and / or the relevant publishing author. You may copy this article only in it's entirety, including any author bio and / or credits, and you must link back to www.itilnews.com.