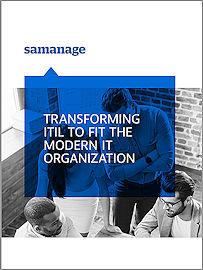 For something that touted itself as the best thing to happen to IT service management, the silver bullet to all of IT woes, ITIL is no longer seen that way by many of the people who actually work in today's modern IT environment. The past several years have seen an evolution as technology has become more than a tool that assists day-to-day tasks. Business objectives rely upon digital tools, and if you're in the technology industry, your bread and butter is the software at your fingertips. While ITIL may have been useful, probably invaluable, to businesses 25 years ago when only a select few were able to understand the complexity of technology, that's all changed now.

Samanage is the Service Success Company, enabling modern organizations worldwide to deliver a superior experience to their employees. Samanage's enterprise service management software accelerates efficiency and visibility into services requested and delivered across an organization, making it easy to continuously streamline process improvement and greater productivity. Bringing unprecedented agility and scalability, Samanage allows you to rapidly and consistently deliver the services that employees need to get work done.
Samanage is the service management industry's top reviewed service desk solution, according to customer reviews. To learn more about Samanage, please visit www.samanage.com or call 1-888-250-8971.

Every area of ITIL that you do not cover creates risk for your organisation and probably you personally. It never ceases to amaze me how many people are living on luck. I often hear people talking nonsense regarding ITIL and they are usually people who have not read, lived or understood ITIL. Even the name ITIL is probably a hindrance to understanding ITIL. ITIL is a map of almost everything that you should cover in IT in some respect, in my opinion, and if you decide to cover some of it in a different way for business reasons such as efficiency or time to market etc., then you need to mitigate the risks that flow from this new approach in some way.

I would be wary of sending some organisations down the road of approaches such as devops unless they understand the full landscape. In my experience, devops and agile have been misused as a cover for poorly controlled practices that look like they will deliver initially and then go on to create headaches for years to come.
Other articles in the same section;
Tags; future of ITIL,retirement of ITIL
This article has been viewed 6380 times.
NB: This page is © Copyright ITILnews.com and / or the relevant publishing author. You may copy this article only in it's entirety, including any author bio and / or credits, and you must link back to www.itilnews.com.