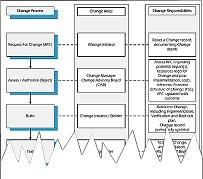 The ITIL Change Management process is comprehensively described within the official publications, but within this article we attempt to provide a high level overview of the stages of the Change Management process, the various roles that need to be undertaken at each stage and also details of the responsibilities.
The article does not stipulate interactions with other ITIL disciplines such as Configuration Management, nor does it go into operational details such as what may be included on a Request for Change (RFC) form.
As part of a series of articles ITILnews will expand on the process described and based on practical experience will include details around 'governance'.
We welcome any feedback and knowledge that you are prepared to share. 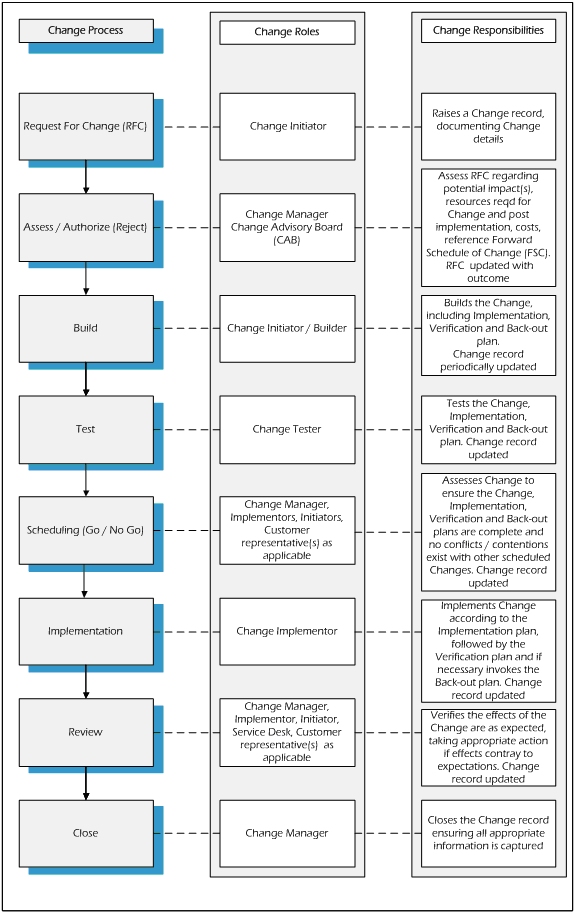 The process highlighted here makes a lot of assumptions that are not clearly called out.

The critical requirements for change implementation must be:

1. All changes MUST be approved BEFORE implementation (except for routine/standard changes that are already pre-approved and follow a set path)

2. Impact assessment must be done at a higher level than that of the person implementing the change

3. Changes must be verified in a controlled environment BEFORE release to production

It is expedient to build these best practices into flows in order to minimize the potential for production 'disasters' due to change.

Finally, the Change Initiator (not the Change Manager) should be the one closing out the change request. This person is the final point of verification that confirms changes have been implemented as requested OR agreed (in cases where there are modifications to the initial request).
Reply on 2015-03-17
Agree with points 1 - 4 above. I also agree that a Go/No Go decision should be made AFTER the implementation and backout plans have been completed and documented - its ridiculous to have an approval BEFORE this stage, what are you approving? If it got to raising a change record then the 'assessment/validation' of the need for change has already been made.

The Change Process in of ITIL is probably one of the most disputed and contradicting processes in ITIL.

I agree with the previous comments with a couple of exceptions:

You're wrong with the go/no go comment. The flowchart has it right where it should be. An Approval does not necessarily result in an overall go/no-go. Some changes will fall apart in the engineering or build phase so putting the go/no-go before this phase has the potential of changing a preapproved go to a no go, what would be the point...

For some there may only be the 3 main goalposts (Initiation, Approval, Implementation) but for others they would include "Plan & Schedule" some people have huge global networks that can take months to get one approved change past the scheduling phase. For some crazy reason people across the global on the same network can never agree on an acceptable outage time to install the new changes

Only the Change manager should close the change request. The change manager follows and tracks the change through the entire process (not the initiator). But part of the due diligence of the Change Manager before closing the ticket is to coordinate with the initiator and make sure everything has been accomplished per their request (basic customer service skills).
Reply on 2014-05-25
In my company, one of those global networks Scott was talking about, the change manager will generally touch base with the requester to ensure everything was completed properly and then ask permission to close the change. Unfortunately this is not written into the policy and is a done as a courtesy.

Please could you highlight the process of approving the change ?

Key points which a chnage manager should take care of while approving a CR ?
Reply on 2015-03-09
The key points which a change manager should take care of while approving a RFC are provided in the third coloumn of the diagram contained within the article.
There are 3 comments awaiting user validation. There are 2 comments awaiting publication.
Other articles in the same section;
Tags; ITIL,Change Management Process,Roles and Responsibilities
This article has been viewed 155854 times.
NB: This page is © Copyright ITILnews.com and / or the relevant publishing author. You may copy this article only in it's entirety, including any author bio and / or credits, and you must link back to www.itilnews.com.